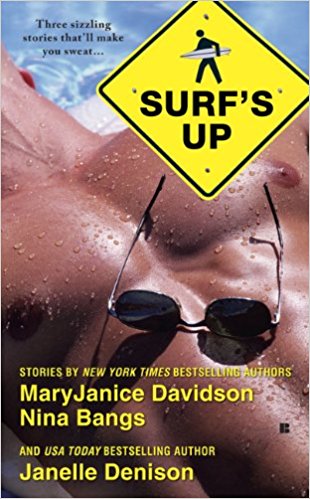 Crashing waves, intense heat, body oil, and men who give new meaning to a day at the beach, in three sizzling stories that’ll make you sweat.

Three of today’s hottest and most talented authors deliver three of the sexiest stories ever—of the hunks who work and play at the sizzling seashore. By no means beach bums, these irresistible guys are as ripped as the waves and smooth as the sand. No shirts required. 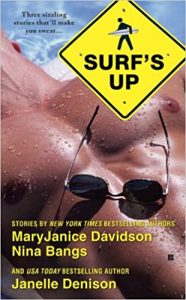 “Cosmic troublemaker test time.” Sparkle Stardust let the words resonate in her soul. Fine, so she didn’t have a soul, but they still resonated. She loved it when a young troublemaker she’d mentored got a chance to show his stuff. Deimos looked suspicious. He’d propped his massive six feet plus of solid muscle against the candy store’s closed door and crossed his arms over his broad chest.

“First a progress report.” She popped a black jellybean into her mouth. Chocolate was a more sensual treat, but jellybeans helped her think. “I agreed to mentor you because I saw the promise of a troublemaker who could develop into a sexual manipulator almost as powerful as me.” She thought about that. “Of course, even I sometimes make a mistake.”

Deimos’s gaze skittered away from Sparkle as he fumbled with the doorknob behind him.

“Forget it. You’re not leaving until I’m ready for you to leave.” Sparkle hopped off the stool she kept behind the counter and strolled to the door. “I’ve given you all my knowledge, and now it’s time for you to produce.” She held up her hand before he could lay a lame excuse on her.

“You’re not a virgin anymore, so don’t try to use that to wiggle out of your duty. As far as I can see, you haven’t made even one attempt to mess with anyone’s sex life. If you fail, then I fail in the eyes of the troublemaker world.” She stood on tiptoe in her Manolo Blahnik stilettos and glared at him eyeball to chin. “I will not be humiliated. Ergo, you will not fail me. Got it?”

Sparkle frowned as she stared past him out the store’s window. “Jeez, you just scared a little kid away who wanted to spend his candy money. Go stand somewhere else and try not to loom. You know, the bald head, the tattoos, the biker-dude look, it’s not helping me sell candy.”

Deimos shrugged. “Action heroes need to be scary looking so the bad guys will respect them.”

Okay, Sparkle was officially pissed. “Yeah, well there’re a bunch of preschoolers outside that respect you to death.”

Sparkle sighed. It was a good thing she really didn’t need the money from the store. Sweet Indulgence was just a front for her real purpose?to foment sexual chaos by matching up people who were totally wrong for each other in every way except between the sheets.

Her setup was brilliant. The candy store was right outside Live the Fantasy, an adult theme park where people could act out their fantasies, childhood or otherwise. It was the possibility for “otherwise” that interested her.

“Here’s the deal. In exactly ten minutes Kristin Hughes will check into the Castle of Dark Dreams. She’s an investigative reporter who’s gotten wind that some of the fantasies offered in the park are sexual in nature. Don’t I wish. Anyway, she’ll be poking around looking for the sex.” Sparkle’s smile was a slow slide of wicked anticipation. “You, Deimos, will see that she finds it.”

His amber eyes rounded in panic. “How?”

“That’s part of the test, silly.” She contemplated the perfection of her nails?Luscious Lust nail color, no chips, no broken edges. It didn’t get much better than that. “Taurin just got back from a fruitless search for his long lost brother. He’s feeling pretty down.”

Deimos’s horrified expression said he knew what was coming.

“To pass the test and graduate, you have to hook those two up.” Sparkle knew her eyes gleamed with the intensity of the true zealot.

Sparkle clapped her hands. “Exactly. It’ll be a deliciously evil and incredibly difficult test. If you pass it, you’ll be ready to fly.” She paused to study his petulant expression. “Well, maybe not fly. But at least you’ll be up to a fast walk.”

“I don’t want to do it.” From his narrowed amber eyes to his pouty lower lip, Deimos was Mr. Sulky. “I’m a supernatural being with lots of power. I should be doing what other cosmic troublemakers do, wreaking havoc throughout the universe, stuff like that.”

Sparkle tried to look sympathetic, but she oozed sarcasm. She couldn’t help it. He made her crazy. “I feel your pain, Deimos. It’s tough being conflicted.”

“I mean, do you choose good or evil? Should you be an action hero who does boring good stuff or a cosmic troublemaker who enjoys the rush of creating spectacularly evil events?” Sparkle didn’t leave any doubt on which side of the good-or-evil fence she perched.

Amazing. Sparkle had never seen anyone actually do that. “So what’s your choice?” She wasn’t worried. Anyone with a brain in his head would choose to be a troublemaker. Okay, so maybe she should worry. She’d forgotten about the prerequisite brain.

Deimos’s expression cleared. He grinned. “I’ll be both.”

She dropped the sympathetic look. “Not possible.”

“Sure it is.” He punched the air to emphasize his conviction, and a little old lady peering at the chocolate display in the window ran away screaming. “First I’ll make bad stuff happen, then I’ll become an action hero and rush in to save everybody.”

“That is so…” Words couldn’t describe how pissed-off she was. “Forget the action hero crap. It’s time to prove you can be a cosmic troublemaker.”

Mr. Sulky was back. “I’m not going to hook up Taurin and this Kristin Hughes. I want to do really cool stuff, like Ganymede does.”

Time to take off the gloves. “You have no idea how lucky you are that I plucked you out of the newbie pile. You want to be like Ganymede and run around laying waste to the universe? Fine, in ten thousand years come back and we’ll talk about it. But right now? You make your choice. You don’t want to do things my way, then get your butt back to Beginners’ Central. I hear they’re looking for a troublemaker to take over Septicanus’s job. He was in charge of constipation and other related miseries of the world. Interested?”

Deimos’s expression was so horrified that Sparkle would’ve laughed if she weren’t so mad.

“Okay, I’ll take the test.” He looked miserable and a little lost. “Uh, any ideas to get me started?”

She sighed. You had to have so much patience with the young ones. “First let Taurin know what Kristin’s up to. Then get them together. Make sure he understands that if she discovers nonhuman entities have found a haven in the park, she’ll write about it. His cozy home will be only a distant memory. If I know our boy, he’ll take it from there. Vampires hate publicity.”

What else would further the cause? “Oh, and you might want to plan a beach party. A midnight beach party. Next Monday would be good. Taurin’s off on Mondays, and it’s a full moon. Think of the sensual possibilities?moonlight shining on the water, the sound of the waves, and the breeze drifting over heated bodies. The whole setup screams sex.”

“Do it.” She’d finish off by throwing him a little incentive. “Who knows, you might even get a chance to use your action hero skills before the week is done.”

His eyes lit up. “Oh, wow. You think so? Guess I’d better get started.” He yanked the door open and was gone.

Sparkle smiled. Men were so easily manipulated. If nothing else, the week should be good for lots of laughs. And if Deimos screwed things up too badly, she’d step in to help Kristin and Taurin see they were fated for each other.

Her smile turned wicked. Of course, she’d forgotten to tell Deimos one little thing. Kristin and Taurin already knew each other, and their hate was mutual. God, she loved her work. 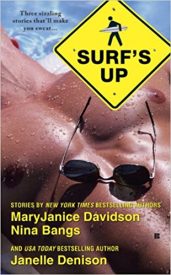