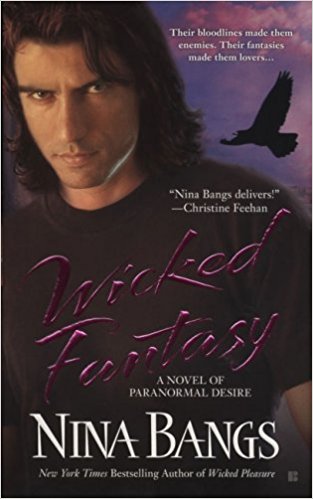 Book 3 in the Castle of Dark Dreams Series

Book 3 in the Castle of Dark Dreams Series

Goddesses kick butt when you tick them off—Conall O’Rourke learned this the hard way after killing an Irish deity’s favorite in battle. His punishment? He’s cursed to protect Kavanagh descendants down to the last arrogant jerk. Now there’s only one left, and Conall thirsts to claim his freedom after centuries of servitude. But who knew the remaining Kavanagh would be so beautiful…

Gerry Kavanagh has dedicated herself to tracking down bad guys of the nonhuman variety. Unfortunately, she finds more than the wereweasel she’s after at the Castle of Dark Dreams. The most despised member of the O’Rourkes expects to shadow her every step so he can “serve and protect” her. Nope. Never going to happen. Too bad he takes hot way beyond sizzling… 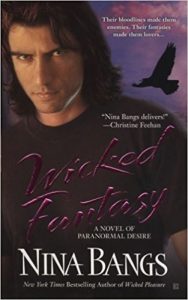 is Book 3 in the Castle of Dark Dreams Series

“Heard from the bitch goddess tonight.” Conall threw back a shot of whiskey and then placed the empty glass firmly on the counter. He ignored the words of seduction in every language known to man—and some probably not known to man—carved into the wood. “The curse lives.”

“Let me guess. She figured you’d enjoyed life too much lately, so she found another Kavanagh for you to serve and protect.” Eric’s smile showed fang, a sure sign he didn’t like the goddess.

Who did? Morrigan wasn’t a lovable kind of deity. “She stopped by to tell me the last living Kavanagh would be here tonight. Not married and no kids.” And if Conall had his way, there wouldn’t be a next generation of his hated enemies.

Eric frowned. “You should’ve called me. I might not be able to take down a goddess, but I could sure let her know you have friends in high places.” He pushed his untouched glass around on the bar as he transferred his bad temper to the painting on the wall opposite him. The one with the almost-naked men and women doing what almost-naked men and women usually do when they hook up. “What was Sparkle thinking when she decorated this place?”

Distracted for a moment from his mad with Morrigan, Conall glanced at the painting. “She was thinking about sex. You don’t name a club Wicked Fantasy and then put cherubs on the walls. But if she gets any more explicit, Galveston’s finest will be knocking on her door.”

Eric nodded and then shifted back to the main topic. “No chance Morrigan will reduce your sentence for good behavior?”

“Nope.” Conall felt Eric’s anger at Morrigan as waves of outrage. Eric’s friendship warmed him, as much as he could be warmed after interacting with the Irish goddess of war. Too bad Morrigan trumped even the power of an ancient vampire. “Thanks for the support, but there’s not much you can do. I pissed her off eight hundred years ago, and she’s got the memory of an immortal elephant.”

Eric shifted his body a little to the right, making sure he wasn’t in line with the bar’s mirror. Most of the club’s customers were too into their partners or drinks to notice that one of the guys at the bar was a no-show in the reflection department, but Eric couldn’t take a chance. Mortals stampeding from the club screaming “Vampire!” might cut into Sparkle’s profits. And next to sex and shoes, Sparkle was all about profits. Conall smiled grimly at the thought of a ticked-off Sparkle Stardust. She might be a pain in the ass, but she was also dangerous.

“Maybe if all the nonhuman entities in the castle united we could chase Morrigan’s vindictive butt back to Ireland.” Eric grinned. “I’d pay hard cash to see Sparkle go a round with her. And what about Asima? Snooty messenger of Bast or not, she’s got a goddess in her corner.”

Conall shook his head even as he scanned the shiny new club Sparkle Stardust had opened in the hotel lobby of the Castle of Dark Dreams. He ignored the darkly lush sexual décor in favor of searching out the reason for both the whiskey and his depression. “Even if we got rid of Morrigan, it wouldn’t end my curse.”

Eric followed his gaze. “Will you know this Kavanagh when you see him?”

“Yeah. All of the rotten, lousy, cheating, thieving”—pause for deep breath so he could continue his list—“conniving, manipulating, arrogant, lecherous bastards look the same. I’ll know him.” Conall just hoped this Kavanagh stayed in Galveston so he wouldn’t have to leave the friends he’d made at the castle.

“Think he’s here yet?” Eric was staring at a small table tucked into a corner of the intimate club. “You said all the Kavanaghs you’d served were men. Wonder why?”

Conall glanced at the door where a couple had just entered. “Nah, no sign of him. I’m always assigned to protect the oldest of the jerks, and the Kavanagh men live longer than the women. They’re too mean to die.” He looked to see what had caught Eric’s attention.

A woman sat at the table talking to Sparkle, a woman who sucked the breath right out of him. He leaned forward so he could see better in the club’s dim interior.

“Want me to describe her? I have enhanced vampire vision, remember?” Eric didn’t try to hide his amusement.

“I can see just fine. And you’re married. Don’t look.” The anticipatory tightening of his body surprised him. He’d thought he was too focused tonight on Morrigan and the curse to notice a woman. Evidently his body didn’t give a flip about evil goddesses or curses.

Eric slapped him on the back. “Go over and meet her. Maybe this Kavanagh won’t even turn up. Don’t waste your time drinking with me.” He glanced at his watch. “Besides, I have to go. Promised Donna we’d walk on the beach tonight.” He slipped off the stool. “I’ll have my cell with me. Give a shout if this guy shows.”

“Walking on the beach?” Conall grinned. “You’re so whipped.”

Eric offered him a glare before stalking away.

Conall felt his smile fade. He wouldn’t call Eric. He’d handled his curse for eight hundred years, and he’d keep on keeping on. He got off the stool and headed toward the woman at the table.

Gerry Kavanagh had come here to catch a snake, but she’d caught a Sparkle Stardust instead. She preferred the snake. Who had a name like Sparkle Stardust anyway? Gerry rubbed the spot between her eyes where a headache would’ve been forming if she could still get them.

“Look, Sparkle, I love your club, and I appreciate that you sat down to keep me company. And huge thanks for the heads up on what I need to do to make my outfit more sensual. But I’m here on business, so I’d better get on with it.” She glanced at the nearby tables. Whoever had e-mailed the anonymous tip had promised that Jinx would be here tonight. “Uh, have you seen a guy that sort of looks like a snake?” Did that sound dumb or what? Besides, Jinx in human form looked more like a happy ferret.

Sparkle raised one perfectly arched brow. “Snake? Why? I mean, if you’re going to hit on a guy, pick one who’s decadently gorgeous and built for sex. Like him.” She pointed toward the bar so Gerry wouldn’t mistake exactly which “him” she meant.

“I’m not here to hit…” Gerry glanced at the bar. Whoa! Would you look at that. There were a bunch of men at the bar, but only one worthy of a “Whoa.”

He was a visual hot fudge sundae and a major wow on her personal sizzle meter. Not only was he tall—hard to judge sitting, but he had to be six four or six five—but he had the broad shoulders and muscular body to make that height seem formidable. Dark, shaggy hair and a hard uncompromisingly male face pushed every one of her buttons from her neck all the way down to…wherever. She was totally unbuttoned.

She coughed to clear her heart out of her throat. Snake. She was after a snake. That’s all she needed to concentrate on right now. Play wasn’t on her agenda tonight. “Yeah, he’s spectacular, but I don’t mix business with pleasure.” She fixed her gaze on Sparkle. Absolutely no pleasure allowed. Damn.

Sparkle made a small moue of disappointment. “How shortsighted. And your business would be?”

Okay, important decision here. She had to find out if Sparkle knew anything about Jinx without—

“Hi there, sweetie. We were just talking about you.” Sparkle reached up to grab the arm of the man who’d walked up silently behind Gerry and was now hovering over their table. “Sit for a while.” She urged him into the seat between them.

Gerry met his intense stare. Gray eyes. Hard, like the rest of him, but softened by a thick fringe of dark lashes. Uh-oh. Business and pleasure were about to collide with enough force to rain down pieces of her good intentions onto her hapless head. How could she concentrate on Jinx when Mr. Whoa was only inches away? She firmed her lips. She’d find a way.

Sparkle leaned toward him and slid her fingers the length of his arm. Gerry lived the moment vicariously—the feel of smooth silky shirt over flexed muscles and warm flesh.

“Gerry and I were talking men. She was looking for some guy who looked like a snake, and I thought that was pretty pathetic. So I pointed you out as an alternative to the snake.” Sparkle’s smile was a sly lifting of her lips. “She thinks you’re hot.”

Gerry forced herself to glance around the club again. If she didn’t look at him maybe… Hot? “I didn’t say he was hot.” Okay, so she’d used the word spectacular. But spectacular didn’t have the same sexual connotation as hot. Fine, so he was hot, but Sparkle didn’t need to put words in her mouth.

“Meet Conall McNair. He helps run the Castle of Dark Dreams. So if you wake up in the middle of the night with an insatiable appetite for something sweet, make sure you call Conall.” Just in case Gerry didn’t “get it,” Sparkle slid her tongue across her lower lip while her strange amber eyes gleamed with the joy of her wicked suggestion. “He’ll cure any woman’s craving for sweets.”

Sparkle was so outrageous that Gerry couldn’t help herself, she grinned. Then she made a major mistake. She looked at Conall. He returned her smile, but his was a lot more effective. It was slow heat set for long leisurely loving until she was fork tender.

“Sweet?” He looked offended. “I might be a lot of things, but sweet isn’t one of them.”

Violence? Her imagination was officially out of control. She broke eye contact to sweep the room again. No Jinx. Stiffening her spine, or whatever part of her body needed stiffening, she looked back at…Sparkle. Coward. “It’s been great meeting you and Conall, but I really have to find this guy—”

“Why?” Conall leaned forward, his large hands resting open on the table.

Body language? Leaning forward, aggressive. Open hands, nonthreatening. Which signal to believe? “Because it’s my job.” There, she’d said it. Now how to explain what she did in a way that wouldn’t have them making a call to the nearest mental health facility.

“Not to repeat myself, but your job would be?” Sparkle tapped one perfect nail on the table. Definitely threatening.

“Uh, not exactly.” She glanced at the floor for inspiration…and spotted Jinx slithering along the baseboard in his little green snake form. He was wearing a mega-watt diamond ring around said sneaky form. Well, hell. “Oops, gotta go.” 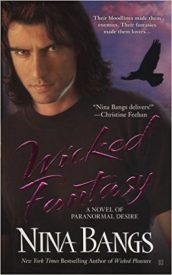